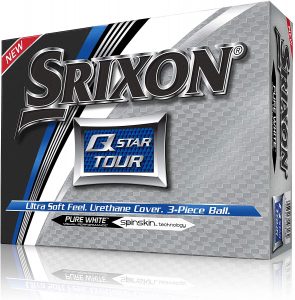 The Q-Star Tour is a mid-high launch, low-spin ball. That’s fairly common for the low-cost urethane covers, where one of the selling factors is usually straighter drives and more forgiveness due to lower driver spin. It’s also true that low spin is a result of decreased compression to some extent. The Srixon Q-Star Tour 2 has a stated price of $32.99 but Srixon periodically conducts discount specials.

Srixon’s new Q-Star Tour 2 golf ball is a premium three-piece ball. It has a lower compression core and a tour-caliber urethane cover. The Q-Star Tour is designed for golfers who require the performance and feel of a tour ball but do not have a fast-swing speed.

Signature Srixon technology, such as third-generation Spin Skin and a sophisticated Energetic Gradient Growth core, provides you the soft feel, maximum spin and control, and maximum distance you need to play your best golf with a ball you’ll enjoy.

The Srixon Q-Star Tour 2 has an average compression of 72. Bridgestone Tour B RXS, TaylorMade Tour Response, and Callaway Chrome Soft are all urethane compression balls that are similar.

Srixon developed SpinSkin with SeRM, a proprietary golf ball coating. Srixon are bringing SeRM to the all-new Q-STAR TOUR, thanks to the technology’s tour validation and several wins around the world. The coating boosts spin at an atomic level since its molecules are connected together utilizing Moveable Cross-Links.

These cross-links act as miniscule pulleys and ropes, evenly transferring loads throughout the molecular chains that make up the Q-STAR TOUR’s urethane cover’s building blocks. SeRM urethane is extremely elastic due to the uniform distribution of shearing force. It’s so pliable that it fills into your wedge and iron grooves when you hit it.

FastLayer behaves like a core with hundreds of layers, with a gradual transition from soft inner core to firm outer edge, providing you distance and a soft feeling golf ball without sacrificing comfort. The new Q-STAR TOUR golf balls have the softest FastLayer core and are designed to play like a tour ball. Because it has the largest core in its class, it also has the largest engine.

That means you’ll get the same distance and short game spin you’ve seen on tour, but with a softer feel. Long game sidespin is greatly reduced by a softer core. Off the tee, this means your driver and wood strokes will fly straighter and stay on target, giving you better accuracy.

The Q-STAR TOUR golf ball’s 338 Speed Dimples boost overall aerodynamics for better flight performance with drivers, woods, and irons. The Speed Dimples improve distance and go straight even in the hardest wind conditions, thanks to the perfect mix of dimple uniformity and dimple occupancy.

Speed Dimples reduce drag while increasing lift, resulting in ideal aerodynamic conditions for optimum flight range. A lower drag coefficient implies the ball cuts through the air with less resistance, resulting in increased speed and penetration. As a result of the reduced drag, your shots will fly straighter in windy circumstances. A higher lift coefficient forces the ball to rise higher in the air, slowing its descent and causing it to stay in the air longer for maximum distance.

Pros and Cons of the Srixon Q-Star Tour 2

Who is the Srixon Q-Star Tour 2 ball designed for?

The Srixon Q-Star Tour 2 caters to golfers with handicaps ranging from 9 to 16. Low handicappers benefit from higher compression balls since they shape their shots frequently but can control them.

The Q-Star Tour 2 is ideal for golfers who have progressed beyond merely trying to strike the ball and are now at a level of competence where they can hit a variety of strokes but still require some assistance with control and stability. Apart from mid-handicappers, this ball is for someone with a low handicap who is having trouble finding the appropriate ball path and wants better control shot to shot.

How does it compare?

To understand the potential of the Q-Star Tour 2, we should compare its greatest competitor, the E12 Bridgestone golf ball.

The Bridgestone E12 was created after a long period of research and development – 12 years to be exact, which is how it got its name. The E12 is Bridgestone’s greatest attempt at increasing ball spin without sacrificing ball speed or distance.

The Bridgestone E12 has a soft polymer core that gets firmer over time. So, although the soft core provides for more spin and control, the outer core’s stronger surfactant coating allows for more speed and starting velocity.

The majority of golfers favor the Srixon Q-Star Tour 2 for overall performance. Off the tee, you could really get into these balls and sink the club face into them. Golfers typically discovered that they could add roughly 20 yards to their drives on average.

The Bridgestone E12 provided good distance as well, but only when the shot was of high quality. It may appear that not all of the energy from the swing is transferred to the ball at times. While both the Bridgestone E12 and the Srixon Q Star Tour are soft, the consensus is that the Srixon provides a better distance and spin control.

The Q-STAR Tour 2 from Srixon is one of the best-performing Srixon soft feel golf balls and most recognizable two-piece balls on the market. With the addition of SpinSkin with SeRM, they’re bringing its performance even closer to Tour ball standards. It’s probably Srixon’s longest ball, and it holds its line well off the tee.

It performs best into and around the greens, with plenty of spin to offer you all the control you need with your wedges. During play, Srixon distance golf balls feel spot on from both the short grass and the deeper rough.

Its bold alignment stamp is the best there is, especially when putting because it gives you a lot of confidence over the ball. When you compare the Q-STAR Tour 2 to other Tour-level golf balls, you have to believe that for $35 per dozen, you should buy Srixon golf balls.