Bridgestone is best known for producing world-class tires, but they have also used their expertise and knowledge to create significant advances in the golf ball business. The company offers a variety of golf balls to fit each player’s needs. 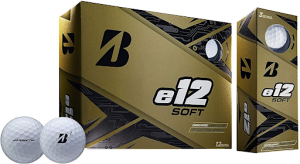 The Bridgestone E12 Soft golf ball is a 3-piece Surlyn-covered ball with Bridgestone’s Gradational Compression Core, which is soft in the middle for feel and gets firmer as distance increases. It’s a whole new ball for Bridgestone, and it’s not a replacement of the e6 that’s been on the market for two years.

The Bridgestone’s E12 Soft golf balls have a soft rubber core that ensures that you obtain the distance you would expect from a soft golf ball. The ball’s Active Acceleration Mantle, as Bridgestone puts it, acts as a mediator between the soft core and the cover. This spherical mantle consists of a high-performance polymer with the goal of improving the connection between the core and the cover.

It’s worth noting that the Bridgestone E12 Soft balls have a compression factor of roughly 50, making them excellent for players whose swing speeds are less than 105 mph. When the ball is in flight, the Bridgestone E12 Soft uses Bridgestone’s proprietary Delta Wing Dimple pattern for less drag and smoother airflow. The improved aerodynamics improve E12 SOFT’s straight distance properties.

The Bridgestone E12 Soft is named after its marshmallow-like feel off the putter or wedge. It makes a dull “tock” on the green. The sound is muted without any “click” when using a good made wedge. This ball appears to blend into the club face.

The Bridgestone E12 Soft is a three-piece surlyn golf ball designed for slower swing speeds that is intended to reduce side spin while adding distance off the tee and having a softer feel. The low compression design will benefit slower swingers the most, with its springiness contributing to competitive distance on a firm, stable flight. This is the ball for you if you want to play with your pals on a Sunday morning and want something that has performance, a soft feel, and is not too expensive. 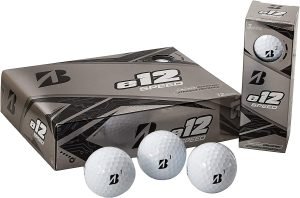 The Bridgestone Golf E12 Speed Ball is a 3-piece Surlyn golf ball in the Distance-Performance class that decreases sidespin and gives explosive distance off the tee while keeping a solid feel. A crucial component of the 3-piece architecture is Bridgestone’s exclusive innovative Active Acceleration Mantle layer.

The Active Acceleration Mantle is made of a new high-performance polymer material that increases thrust and initial velocity at contact while also allowing Bridgestone to improve the core for more forgiveness and feel. Designed for players with driver swing speeds of more than 105 MPH. Bridgestone’s Delta Wing Dimple design is used in the Bridgestone E12 speed’s cover for reduced drag and improved aerodynamics.

The Bridgestone E12 Speed has a similar feel to a typical tour ball. It makes a sharp “click” when used off the putter. With a wedge, a good strike is accompanied with a comparable, responsive “click.”

The hard feel of the ball around the greens is just as obvious as it is off the tee, and the surlyn cover ensures you will not get the backspin or reaction you would anticipate from a urethane-covered ball. Longer pitches have a higher flight, which helps with stopping power to some extent, but if you leave yourself short-sided on a downslope, you will be looking at a long par putt.

How do the two Bridgestone golf balls compare on the golf course?

The E12 Series golf balls have been designed with the long game in mind, with minimal spin and a straight flight. Ultimately, they are long distance balls with lots of speed. The Bridgestone E12 Speed and E12 Soft excel in all these areas.

Both balls have a very modest spin off the driver. They function similarly at a swing speed of roughly 105 MPH. For slower swingers, the Bridgestone E12 Soft delivers somewhat greater ball speed and slightly more spin. Alternatively, the Bridgestone E12 Speed increases speed while lowering spin slightly for faster players.

How do these two golf balls compare to the Tour B XS?

Perhaps the E12 series’ largest competitor is the Bridgestone Tour B XS series. Believe it or not, the Tour B XS golf ball was designed for the likes of Tiger Woods. He was looking for a ball that would offer him more distance and spin, and he came up with this. This ball has a softer feel and is designed for golfers with a swing speed of more than 105. This ball is suited for professional golf players.

The Tour B series is for golfers who want tour-calibre performance on all shots from tee to green. The Tour B RX and RXS were the first tour balls with a low compression. Both balls are intended for golfers whose driver club head speeds are less than 105 mph.